The Daily European, or the News Paper, is the main source of information and point indexing for the Game of Supremacy 1914. With articles dealing with military battles, to Economics and Major construction events, such as upgrades and Battleships, the DE offers several interesting features for the user.

Commonly the Daily European is used for the creation of Indepth Articles for Roleplaying purposes. The Daily European allows the players to respond to Events and other scenarios on an International Level.

Next to the "Daily European" header, you will find the date of the edition you're currently reading and the possibility to read any edition of the past days to get yourself even belatedly up-to-date. To do so, you either need to use the '>' or '<' button (to step one day forward or backward) or you just type the number of the day you're looking for into the text field in between the buttons.

The "Write Article" button gives you the opportunity to write an article yourself, which will appear in the DE immediately. This can be a very powerful diplomatic tool as everybody can read it. But be careful: these are official statements which can have profound effects if you don't choose your words wisely and thus offend or expose other European leaders. If you have some top secret information that can become dangerous for yourself if others get to know who the author is, but you feel the need to publish it anyway, you can cover your identity by selecting "Anonymous". Doing so makes the article appear without a signature from the author. 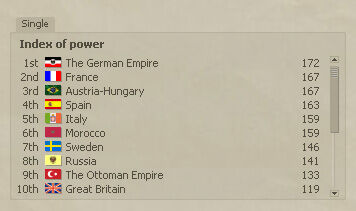 The listing on the left shows the current positions of the European leaders in points. These points are being calculated from provinces, province upgrades and the morale level. You can find more details about the calculation of points here.

The DE Index of Power is updated once every day. The one player who can reach the required amount of point first in this Index becomes the supreme ruler over Europe and wins the round. (Note: The amount of points needed can be altered by choosing different victory conditions.)

The total amount of 2000 relative points is permanently distributed between all players of the round. If another player gets proportionally stronger, he will get a larger percentage of the basic points that are available in the current round. As the winning points in the DE are calculated relatively, other players will then loose points. (Basic points are not visible anywhere and only exist for calculating the relative points in the background.)

In this section, you see a snapshot of the current map of Europe, which is updated once a day. If you switch back to a previous day, the snapshot changes to the map of the specified day. This gives you a visual impression of the current territorial developments in Europe such as the expansion of each nation, or current riots and war zones. Those final two are marked with a fist or flames in the corresponding provinces. 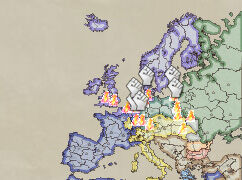 Here you will find all kinds of information about the current events on European soil. The most important things are published automatically without the direct influence of the nation's leaders. These include:

Players can write their own articles as well. They can be published as official government communiqué, or as from an anonymous writer. The High Command (a subscription-based premium account) offers the possibility to choose the picture that appears on the player written articles, otherwise the in-game profile picture is chosen. If the article is sent anonymously, the member of the High Command may choose to add a picture if he wants.

Community content is available under CC-BY-SA unless otherwise noted.
Advertisement