Edit
watch 01:36
We're Getting Mutants in the MCU - The Loop
Do you like this video?
Play Sound

Artillery are the game's basic ranged weapon, being able to target enemy units without coming directly into contact with them. Artillery are cheap and quick to construct and requiring a level 1 factory can be constructed starting from day 8. Their firing range (50 km on the 10p map and 133 km on the 31p map) is greater than the Light Cruiser's making them a viable coastal defense against them. The Battleship's range is larger, however. The main role of artillery is to act as a support for infantry and other close combat units, and in general should not be used on its own.

Artillery is an important unit throughout the game. While one artillery unit may not be doing much damage on its own, a group of 10+ artillery batteries will already make a significant difference and will stack the odds for you if your enemy has less. It takes only one day to produce artillery with a level 4 factory. 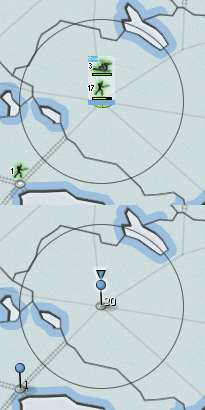 To the right: Three artillery batteries along with 17 infantry brigades located in a Greek city. The black circle depicts the artillery's range of fire. The upper picture is in icon style, and the bottom one is in pin style (can be changed by right-clicking anywhere on the map and choosing army paint mode).

Click here for a comparison of the speed of all units.

Community content is available under CC-BY-SA unless otherwise noted.
Advertisement